skip to main | skip to sidebar

into the grey of winter

at the latter part of the day, a small walk was done. 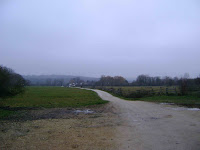 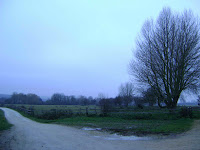 Labels: the ox, where the cold resides

well, if i look at the way i finish my homeworks this week, i think i have most of the things i wanted to do done. the priorities, the secondaries, tertiaries and quaternaries... are all well arranged in time. leave the rest for another week. thanks to the planning. this weekend i may have time to take benny's offer of doing a short hike across the countryside.

visiting the trout sounds very tempting to me.

legend has it that the trout has the most delightful setting by the bridge with a large terrace looking out onto the river thames. to stroll up the port meadow in the late afternoon sun and have a picnic while nestling on the banks of the thames is going to be one of the most memorable things to do in oxford.

let's pray the sun will be on our side.

"she keeps some moet and chandon in her pretty cabinet...."
Posted by Vahd Mulachela at 6:49 AM 2 comments:

i kinda need to dilute this idea out of my head with a lot of water. so i took a glass of cold water and drank it. but the idea is still there. as solid as it was before. i took another glass of water, this time warm. and drank it. but it's the same. the idea stays there. i wonder then, if idea is not dilutable in water like sugar usually is. even if they both sometimes taste similarly sweet.
Posted by Vahd Mulachela at 8:54 AM 1 comment:

come to where the flavor is

this coming saturday will be asia pacific food festival day in corpus christi college. after a week full of intense assignments, here comes the fun part. all indonesian students in oxford are united to contribute to this delicious event. there are less than twenty of us but we will entertain at least two hundred portions of special dishes from our homeland.

many other asian students unions will participate too. our decision to penetrate the event came in the last moments. and so the competition for the menu started earlier as we must avoid cooking the same dish presented by other groups.

the supreme council of kitchen duchess already decided what our menu will be. the other crews will do their best to make sure their decision on nasi goreng bali (fried rice), dadar gulung (rolled coconut pancake), gado-gado (vegetable mix) and sate reign on saturday night.

ah, i can already smell the food in my mind...
Posted by Vahd Mulachela at 6:31 AM 2 comments:

Labels: food and life, the ox

the one that's coming next

it is about the time for me to revisit southeast asia, at least in thought if not in physical form. i have always been carrying the idea since the day i depart, and it seems that the interest have formed a more recognizable shape nowadays. a shape that's not always present. but when it is, there is an appetite to make it closer to me. it's like a warm pillow you find next to you when you wake up in the morning. you know you can't take it all day with you, but it feels justified to hug it for the last few seconds before you go taking shower.

as to revisit southeast asia, if the decision is made, it will bring further consequences. it's like many other decisions we make, basically. but to revisit it, even if merely in thought, has two contradictory directions. one leads me to additional works of reading and preparation to write something - hopefully; and the other one takes me to a state of temporary peace - also hopefully. which one comes first doest really matter. they both are like two next stops from this point to get to southeast asia. ah, what a curious roadmap.

i find the situation is challenging. the clock is ticking. each second comes and goes whether you are aware of it or not. night is getting longer. but sleeping time is not. i pray that before weekend comes i already have a clue.

another kind of rain has just poured down 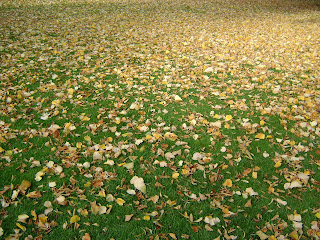 heavy wind has caused this.
the blanket of green is now half yellowed.
by the falling leaves.

and here is another perspective of the park
right in front of the house where i reside: 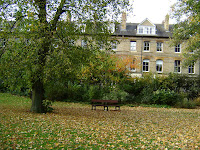 "ah, look at that bench over there, what a perfect spot to have a picnic lunch isn't it?"
Posted by Vahd Mulachela at 6:52 AM 1 comment:

all that is now
all that is gone
all that's to come
and everything under the sun is in tune,

but the sun is eclipsed by the moon...

if you walk under the rain, it is easy to think for a bowl of hot noodle soup. hmm…

last saturday i walked alongside the river , from the floyds row in south oxford, downstream to the village of iffley. with ben and rangga. three of my countrymen trying to defeat the cold shower of november rain. no one carried any umbrella.

on our left hand side, the river. rowers from different colleges were seen practicing hard to get prepared for the next month's championship. all wet. on our right hand side, meadows. cows, horses, swans and empty fields with occasional bushes. the horses are bigger than those you see around ganeca street of city.

we walked to reach the site of a very old water mill of iffley. built in the 11th century, survived for eight hundred years of grounding malt, barley, corn and other cereals, the mill was burnt down in 1908.

at the end of our trek, we arrived at a lock next to a small chapel where the mill used to be located. it’s called mill lane, close to the site of the 12th century norman parish church st mary the virgin.

i know that not everybody loves rain. but among those who love it will understand how it feels to smell the crisp air. the sound of raindrops, the dark misty sky, the chilly air and the good companies… the place has just some resemblances to an empty street i used to visit in lembang of west java. some pine trees would make it looked more similar.

niki, you would love to be here.

is the origin of thames river. if you follow the stream, it will eventually take you down south, there where you can find town...

twenty years from now you will be more disappointed by the things that you didn't do than by the ones you did do. so throw off the bowlines. sail away from the safe harbor. catch the trade winds in your sails. explore. dream. discover.

if you set out for an adventure, and you're absolutely convinced you're going to be successful, why bother starting?

when one dines alone
one knows the meaning
of conversation.

for jikan, the silent one

"Above all, remember that you are standing at the center of life, not on the periphery of someplace more important. The lives lived here were and are as full of love and drama as any on earth, and you have the privilege of learning about them from the most definitive sources. No other town, church, house, or street on earth is exactly like this one, and you are listening to its beating heart."

if it be your will.

"...but i will walk the road however hard it is, because only on the road you can see that yesterday lies behind you and tomorrow waits on the path ahead. The road measures life in distance. The further you travel, the longer you live."

a gift from leo

You tell me that silence
is nearer to peace than poems
but if for my gift
I brought you silence
(for I know silence)
you would say
This is not silence
this is another poem
and you would hand it back to me.

dimming of the day

"In loving you
I've held back no reserve
and so I've nothing left
to give tomorrow's lover
when you go."

Vahd Mulachela
Jakarta, DKI, Indonesia
my name is vahd. yes, vahd. I love maps, reading, writing, figuring out 'the way to get there and back again'. my coffee is black with a teaspoon of sugar. I rarely discuss my tailor or my hairstyle. no matter how busy i am, i can always be relaxed... especially when i'm in cikini or when there's good music. i play the acoustic guitar (mostly to entertain myself and someone i try to impress) and i have a pair of old shoes that's been walking with me through so many different streets where i saw and meet people quite like you.

the books that i read and reread

the pictures that vahd loves